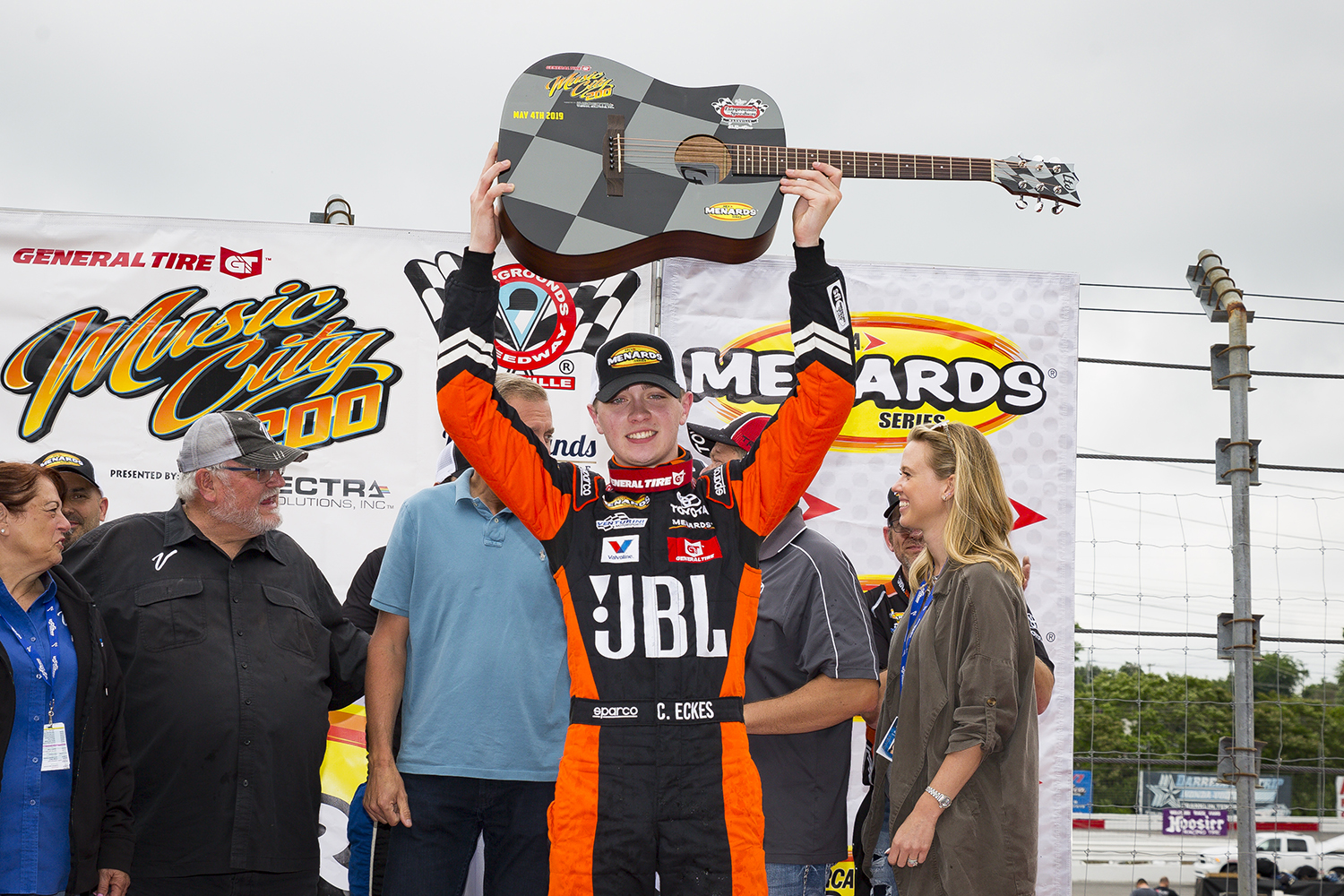 Eckes, making a statement with his performance, took the lead on a restart at lap 81 and led the final 120 laps to earn his first series victory of the season and the fourth of his career.

Eckes led the ARCA Menards Series standings entering the third event of the season at Salem Speedway but was forced to the sidelines with food poisoning on race day. After missing that race, Eckes returned to action at Talladega Superspeedway but was swept into a crash at the race’s midway point and he finished last in the 26-car field.

Determined to overcome recent adversity and put himself back into the championship hunt, Eckes was visibly relieved after climbing out of his JBL Audio Camry and hoisting Nashville’s coveted guitar in victory lane.

“It’s been a really rough couple of weeks,” Eckes said. “That was about the longest 80 laps of my life. We pitted early and I figured there would be a caution and there would be one guy with four tires in the pits. But that never happened. We still need to be a little better but we took some strides in the right direction for when we go to Toledo for our next short track race.

“I had a feeling in my stomach that we had a car that could win. I knew it was going to be a good day. We weren’t really happy with it yesterday. We were okay with it. We got it closer but it wasn’t where we wanted it completely. We got it close enough but we have room to get better.”

Extending VMS’ early hot streak, Eckes’ win at Nashville gives the team its fourth ARCA victory of the season in five attempts. Eckes becomes the third team driver to win in 2019 – joining Daytona winner, Harrison Burton and two-time winner, Michael Self (Pensacola and Salem), who both come out of VMS’ potent driver stable.

On Sunday, Eckes was forced to battle for the lead against teammate and pole sitter, Chandler Smith (No.20 Craftsman Toyota), who led the first 80-laps before finishing third overall. Smith was fastest in practice and started from the pole when qualifying was washed out by rain.

Despite his own disappointment, Smith dazzled again earning his second General Tire pole award of the season and his sixth pole in just 12 series starts. Smith’s pole award also represents VMS’ fourth on the season. Now with nine career top-5’s, the Georgia teen betters his series stats with an average ARCA starting position of 3.2 and an average finish of 4.2.

“He just had better turn ability than I did,” Smith said. “We overloaded the right front tire today. They rolled the center better than we did and that’s where they got us. We learned some things today that should help us at Toledo.”

Michael Self (No.25 Sinclair Oil Toyota), who came into Nashville as the series point leader, finished a disappointing 15th and dropped to second in the standings after getting caught up in an on-track incident between the No.18 and No.10 cars happening outside his windshield. Suffering significant damage to the front end of his Sinclair Oil Toyota, Self was forced to retire early after completing 73 of the 200 race laps.

The ARCA Menards Series returns to action Sunday, May 19 in the Sioux Chief PowerPEX 200 at Toledo Speedway. The race will be televised live on MAVTV starting at 2 pm ET.