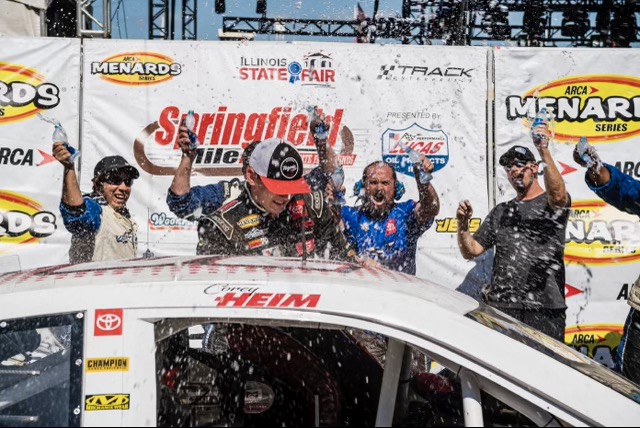 August 23, 2021 (Concord, NC) – It was ‘Heim-Time’ Sunday afternoon at Springfield as Venturini Motorsports’ Corey Heim dominated the ARCA Menards Series event at the Illinois State Fairgrounds picking up his sixth win on the 2021 season and matching Ty Gibbs in the Championship point standings.

“Can’t thank my Venturini Motorsports team enough for battling back today,” Heim said.  “I know we kind of got behind at one point, but I felt good about my Craftsman Toyota all day and just wanted to bring it home in first.”

Heim’s victory handed VMS their fifth team win at Springfield since 2014 and their 78th overall all-time in the ARCA Series.

Starting from the pole position, Heim was on cruise control leading 86 of 100 laps.  His only challenge of the day occurred on lap-73 when he caught a lap car in turns 3 and 4 and made contact to the rear bumper attempting to navigate his way around the slower car.  Momentarily slowed and moved back to third place on the ensuing green flag, Heim would get his spot back after chasing back down the leaders.

Teammates Jesse Love (No.15 Mobil 1 Toyota) and Toni Breidinger (No.25 Free People’s FP Movement Toyota) turned in respectable finishes with Love earning a fifth place finish while Breidinger scored her second consecutive top-10 with a seventh place effort.  Love’s Springfield outing came less than 24-hours after winning the ARCA West race at Irwindale Speedway in California.  After completing his media responsibilities late Saturday night, the 16-year old driver flew to Chicago and arrived at the Springfield track within minutes of taking the track for practice.

Staying with the Midwest theme the ARCA Menards Series will be back at it Sunday, August 29 for the Sprecher 150 at the Milwaukee Mile.  The race will air on MAVTV beginning at 2pm CT.